Bathing with the Dead

A tale of India and greed, and the Gods.

The holy Ganges river flows through Varanasi. Every day thousands of pilgrims and locals ritually bathe in the (polluted) water, for whatever blessing this will bring them. Those in the know say that the Universal Soul is more easily tapped in this holy city.  Note the temples and nooks at water’s edge for holy men to sit and meditate.

I arrived in Varanasi after several long flights and little sleep – so perhaps that is why when I fell into bed surreal voices filled my head. I woke from an ultra-realistic dream where I was caught in a net of the local gods. Perhaps it wasn’t the spirit of the city probing me, as I probe cities myself when I travel, pacing them for long hours, letting the sights and sounds and smells sink in.  But then again…

Me in rowboat taking in the ghats

The next day I took in the river sights with a boat ride in the pleasant morning, snapping pictures of ghats (long steps heading down to the river), watching people bathing and ritual bathing (their souls), washing their clothes, meditating, and lastly, burning the dead (more on that shortly).

I paid the boatman (who bragged that he was an 8th generation boatman – his grandfather had rowed the same boat as we took that day) his requested 100 rupees (1 dollar 60 cents) for the hour plus tour, then tipped him 100 rupees to his delight.

Holy man doing ritual bath in the Ganges. Scientists have tested the water and say it has a noticeable radiation from the minerals in the Himalayas.

My hotel is clean and well located, the room surrounded by thick concrete walls so well insulated from the afternoon heat, and at $15 a night a steal. And the padlocked on the door keeps my items safe. The hundred steps down to the river are easy going down too, but coming back up after a 2 or 3 hour walk leaves me huffing and puffing. 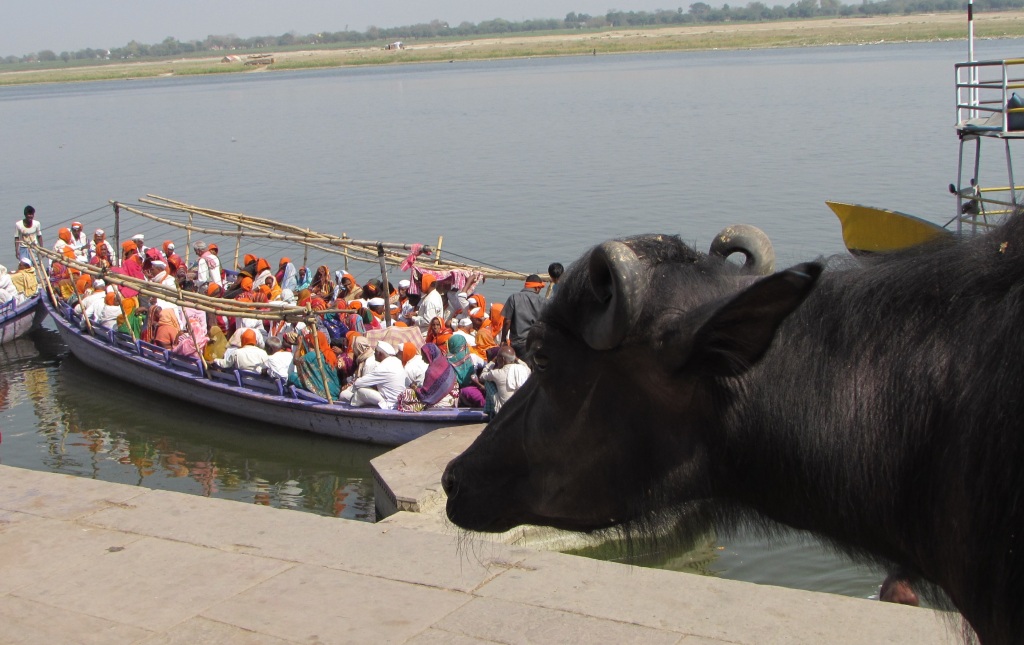 Buffalo roam the riverwalk, the entire city in fact, along with cows and goats, wild pig and on the rooftops monkeys.

I have touched the Ganges water, I even drank a white liquid offered at one of the temples, a fluid floating from the Universal; I have looked into the eyes of several holy men. But to be honest, after the first night, I do not feel any closer to anything spiritual, anything magical. The holy men seem as curious of me as I am of them. And the slow moving river reminds me of the Rio Grande, and the city of Nuevo Laredo, that dusty border town I lived in 40 years ago when I gave up the American Dream and tried on the Mexican one. 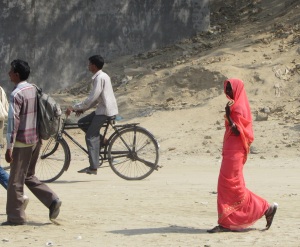 But yes I have been touched by the sights (the women in local dress, the kids chewing gum and flying kites), the smells (mostly cow dung) and the huge flux of people along the river and in the city streets (such energy and commerce – the whole population seems to be working in micro- industry as clerks and fried food stall keepers and cart pushers etc). And finally and most significantly I have been touched by my visit last night to Manikarnika ghat, where they have been cremating bodies in the open for thousands of years.

Here is a snippet of  a fictionalized version of that visit from my novel in progress:

Randy watches as the golden shroud is removed from the body which is then placed on a bed of wood.
“Sandalwood is the best, gives a nice odor,” says the volunteer guide. “But so expensive. Most can only pay for banyan wood.”
A second layer of cloth is unwound from the man, exposing his head, large chest and belly.
One of the mourners pours a gallon jug of runny liquid over the head, the chest, the big belly, while the others massage the flesh of the dead man. A last oil massage?
The body looks alive to Randy, the way the flesh moves under the hands of his friends and relatives.
The body looks like it is about to get up and say, “Hey what’s going on!”
“That is butter,” says Randy’s volunteer guide. “So he will burn nicely.”
Randy shivers. That was the taste he’d noticed in the back of his throat – the smoky taste of meat burned in butter.
“Notice no women attending,” the guide points out. “Because women cry and the crying of a loved one can trap the soul here.”
For some reason that makes sense to Randy.
They wind their way past men mourners to the top level of the outdoor crematorium, where six fires are blazing. Six bodies are turning to ash. The heat snaps at Randy, he leans away and his hand brushes the surrounding brick fence – the bricks are furnace hot.
Into the far corner of the top level they go, still the heat searches them out, is practically unbearable. Randy notices the bare leg of a dead person sticking out of the nearest fire. The leg is twisted, looks about to break off. He can’t help himself – he stares into the other fires to see what parts stand out.
“Here are the Brahmin, the high caste of priests, artists, teachers and technicians. Rich in life, perhaps, but nothing to take with them. The ashes are even left by the families. For what remains?”
Randy’s guide takes him higher still, past stores selling golden shrouds, gallon jugs of butter and half size snack packs of chips.
“Only the man’s breastbone and the woman’s hip bones survive a good burn,” says the guide. “For a man’s chest is strong from work and a woman’s hips from childbirth. But whatever is left after 3 hours goes into the river. A hand, a foot, a skull.”
Randy wishes the tour was over, but continues to follow.
“Still don’t mistake that all the dead are burned here. See, there, those heavy rocks by the river.”
“They look like tombstones,” says Randy.
“Children under the age of 12, pregnant women, sadhus – holy men you know, and lepers are not burned here. Instead their bodies are tied to those rocks and dropped into the middle of the river.”
Randy struggles with that image, with the knowledge that 3 thousand years of bodies, of dead children and pregnant women and holy men with long white beards and lepers with those sores and missing fingers, that these thousands of bodies lay strapped to tombstones just fifty yards off shore.

Let me wrap up with a few pictures: 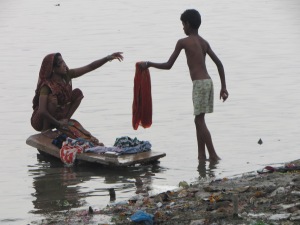 Washing clothes by hand in the river 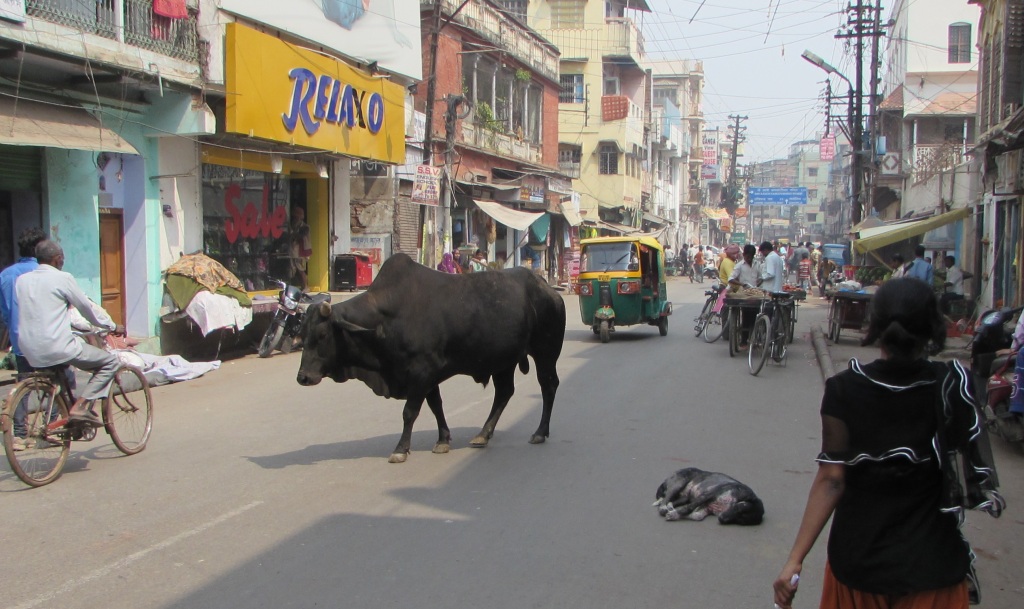 This little girl asked me to take her picture – was thrilled when I showed it to her. 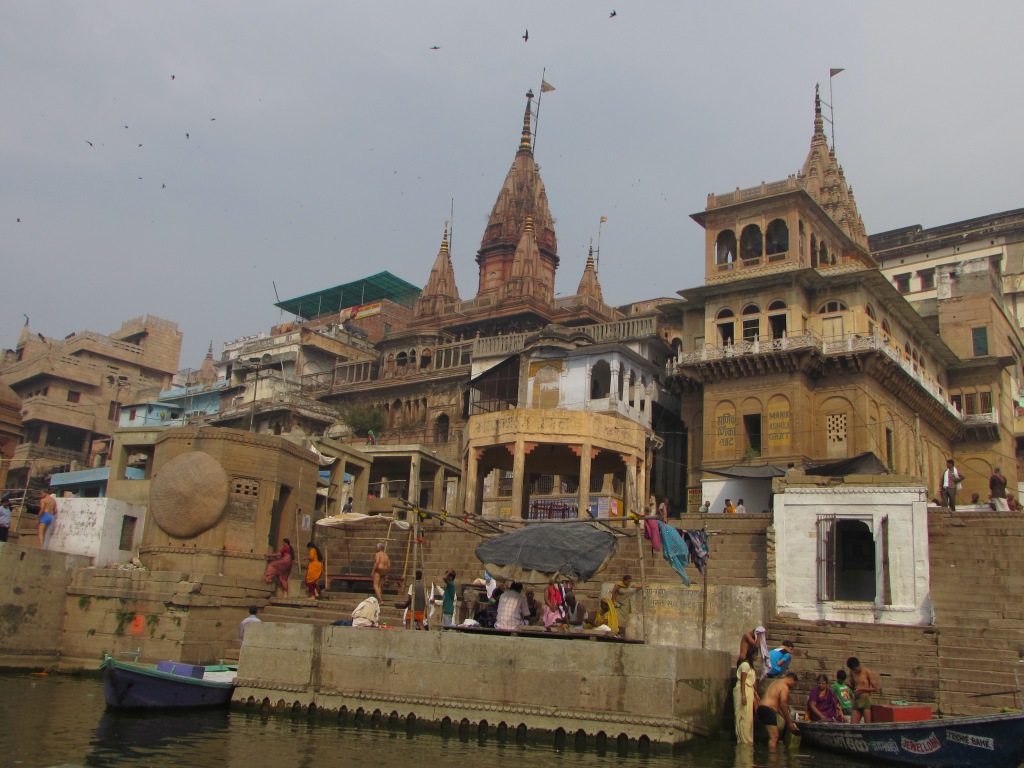 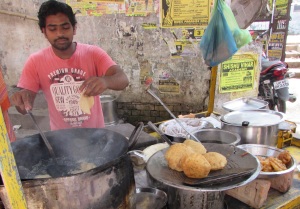 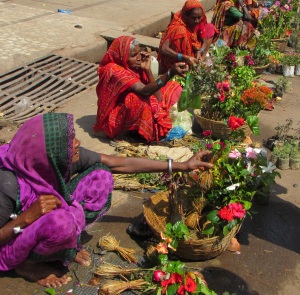 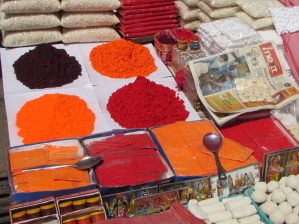