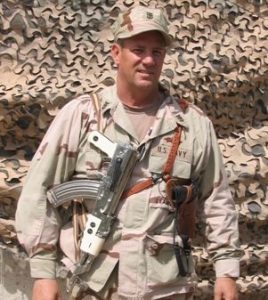 After living in Hell, Iraq, and Anguish, Afghanistan, and most recently PTSD, Texas, my younger brother John told himself, “The heck with this! I need to move to a better place!”

After a little house hunting, he ended up in Paradise, a subdivision park of one acre wooded tracts on lava rock a few miles from an active volcano on the big island of Hawaii. (Yes he is still living on a time bomb, but aren’t we all living at Nature’s whim?) 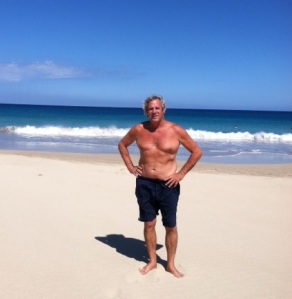 John at Hapuna beach (the sunny side of the island)

My sister Cyndy, doing brave battle with cancer and chemo (the toxic Red Devil), told me we should go visit John in Paradise, to get an early look at Heaven, and I agreed. So we hopped a plane and visited the young lad. We had much to learn – for example, all the islands in Hawaii have a dark (rainy) and a bright (sunny) side (like most people I suppose). Luckily the islands are small enough, even the big island where John lives, that if you are tired of the rain or tired of the sun, you can simply head to the other side — it is your choice. And if you tire of either side, you can sit on a cloud atop Mauna Kea, or go to the island’s edge and do a crystal clear swim with the Angels. 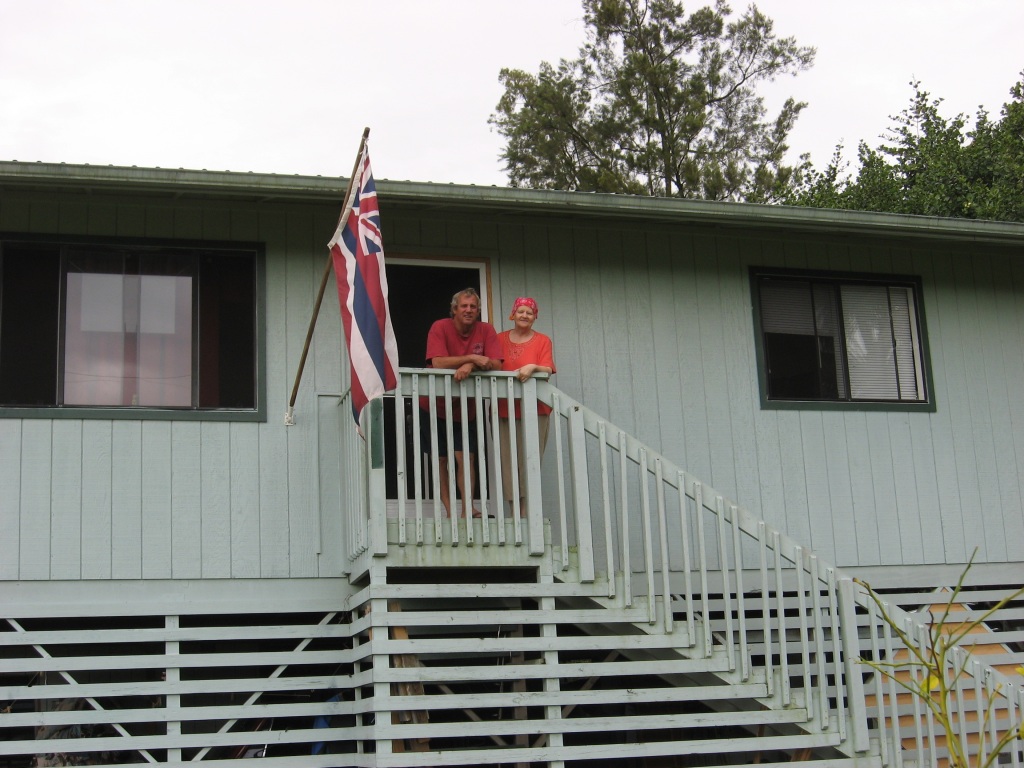 Yes, we had much to appreciate in Paradise/Heaven/Hawaii. 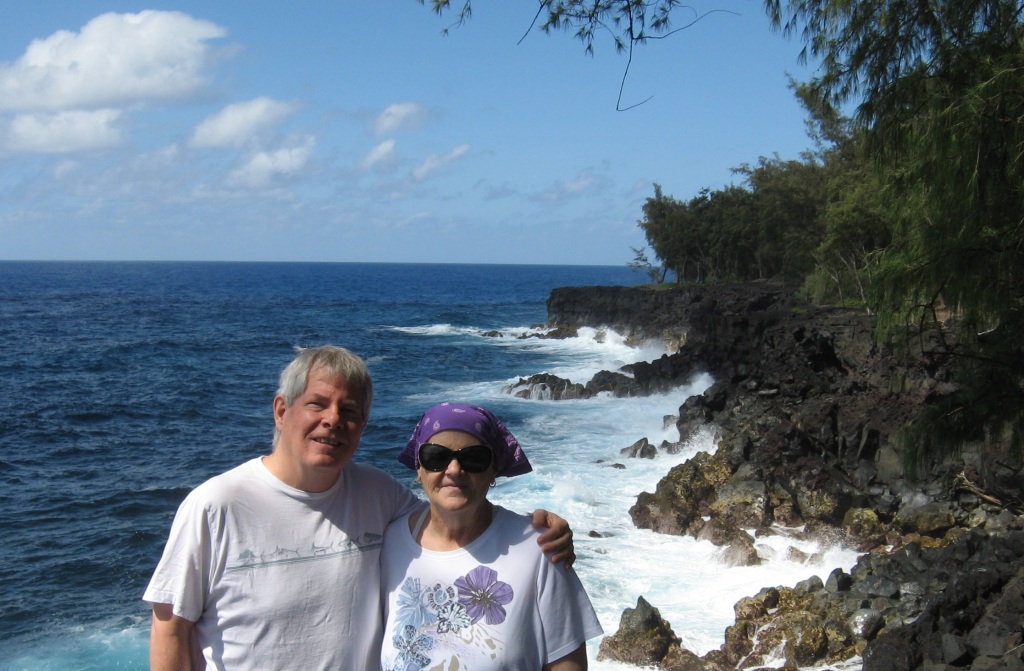 Me and sister Cyndy 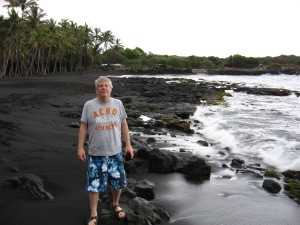 Me on black sand beach

Besides the places that John took us, like Rainbow Falls and black sand beach and Volcano park, there were small discoveries, like Donna’s Cookies and One Ton Chips and that local favorite, fried Spam. And the winery, and the Inn at Kulaniapia Falls. And that Hawaiian streets have names like Kanoelehua and Kahaopeia, Mamalahoa and Saddle Road.

As John uses night air thru open windows to cool the house, we learned too that small critters come alive at night, and fill your dreams with a chorus of chirps and croaks. Click the below arrow to hear what we heard as we fell asleep.

We learned that John has no city water or well – he gets his water from roof runoff into his catchment tank which then supplies the house (with the help of an electric pump). Most homes in Hawaii are so equipped.

As John likes to scuba, and I like to snorkel, I proposed we do the manta ray night snorkel/scuba tour on Kona (sunny) side. 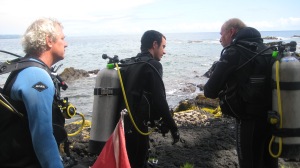 John assisting with a scuba class. The older gent on the right is Bill, who owns a scuba shop in Hilo – 70 years old and he still scubas every day.

The idea of entering the ocean at night, with 14 foot manta rays swimming about (and possibly sharks) excited me. On the other hand, ocean swells in a small boat tend to upset my equilibrium. I took seasick pills and crossed my fingers. 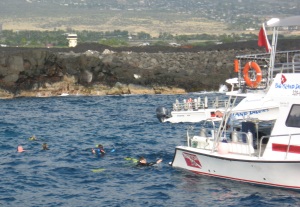 Out at the manta ray scuba site – sea was a bit rough.

Me snorkeling before dark

After our preliminary swim, we climbed on board and bounced and rocked like a cork until the sun went down. I tried to keep my eyes on the horizon, and take deep breaths, but my stomach was not happy. I took a bit of offered turkey wrap, and a few chips and water to no avail. From the rail I watched them lower a set of bright lights to the bottom in a natural rock circle, to attract plankton which then draws in the giant manta rays. I hoped diving back into the water would save me.

Finally night fell and we snorkelers dove back in, with flashing lights on our masks. We glided out over the water with our hands on a surfboard fitted with lights shining down towards the bottom. The divers swam down to the boulder-strewn bottom and sat or lay there, with flashlights pointing up, their occasional bursts of bubbles floating like jellyfish to the surface. With my face in the cool quiet water, looking down at the lights flashing up from the bottom some 30 feet below, observing thru my mask, breathing thru the snorkel, I felt a bit like I was suspended in the sky above some holy meeting ground in the middle of a desert. I felt dizzy as the surface waves rocked my outstretched body relentlessly. 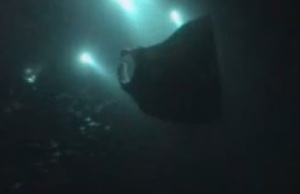 Manta ray glides into our circle of lights

A large school of foot-long bass-like fish mingled thru the lights. We waited, hoping for one of the manta rays, or Devil fish as they are also called, to arrive. I noticed spots in the lights, like dust in sunlight – this must be the plankton, I told myself. They looked like tiny sparkling souls.

I watched as a black cape of a fish merged out of the surrounding black depths and glided into our lights. Seven foot wide, it circled the divers below, taking in the scene. Soon a larger ray, at least 14 foot across, appeared, dodging the first.  They circled the area, opening their large mouths, flapping the ends of their wings, breaking into graceful somersaults between the divers below and us watching from above. With each somersault the larger ray got closer and closer to me, until I could see deep into its ribbed-like mouth, with its bottom horns splayed out. Its massive white torso passed inches from my face – one of its wings gently brushed my leg and I felt it feel me as it turned and descended. 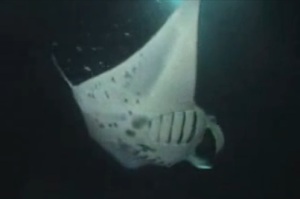 The Devil ray, as it is also known, does somersaults with its mouth wide open to take in the plankton.

The sight was unbelievable, and as if its touch had been too much, my stomach forced me to raise my head and I tossed my dinner as far from the others as I could. With that I was cured and I placed my head under again, to watch the ceremony another half hour, there on the surface of Heaven, as the Devil spun below me and swallowed all those tiny hapless souls.

End Note – When John lived in PTSD, Texas, he wrote over 200 songs, addressing those trying times with powerful lyrics as in the below ‘Sea Bag’ (click arrow to play).

Now John lives in Hawaii, where his inspiration is the sea, the trade wind, the rain.

Most of John’s songs can be found at ReverbNation/johnelse. My favorite is ‘Did I Come Home?’