While planning my bi-yearly trip to Paris to visit old writing friends, I decided to also visit my niece Chantal and her husband Guy in Bordeaux. Then I found out that my old friend Mickey (who I had not seen in 30 years), would be vacationing in Alba, Italy, with his wife, so I booked a train to Alba as a side trip. Then I heard that another friend I had not seen in many years, who lives in Casablanca, would be vacationing in Marrakesh, so I booked a side trip there as well. So a relatively routine trip to Paris mushroomed into quite an invigorating trip, both across countries and time. 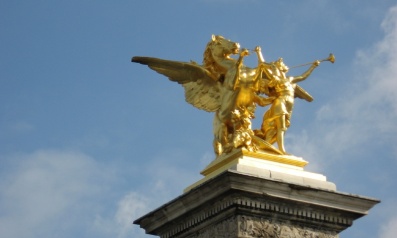 First France: As I’ve covered extensively in previous blogs, I lived and worked in Paris for 5 years (1988 to 1993) and made good friends there both from work and from my writing group. These friends and my memories of the city draw me back often.

street view of the Eiffel Tower

My writing friend Lidmila lives with her husband Petre a few blocks from Trocadero, in an upper class Parisian neighborhood. I always turn, as I exit the Trocadero metro, to glimpse the Eiffel tower and the Italian, German and Japanese tourists taking pictures while their buses idle. Petre is a brilliant thinker, and ex-IBMer like myself, while Lidmila is the queen of articulation. I enjoy the several block jaunt down the grey and white stone facade of buildings on the thin sidewalk, passing the two plazas with their restaurants and patisseries. Arriving at their place, and announcing myself thru the intercom, they send the lift down for me. We have a nice lunch, then Lidmila takes me on a long walk as if I were one of her cats, to the Bois de Boulogne.

My dear friend Lidmila, a writer of great prose.

The Bois de Boulogne is a park located on the western edge of Paris. We walk foot-worn paths through trees whose leaves are browning from the exhaust tainted air along the peripherique beltway. On the path little stirs, except the occasional jogger, dog walker, or left-over night stalker. The edge of the path has the occasional candy wrapper and used condom. Finally we reach the shallow manmade lake, and circle the murky water where ducks paddle. On the sidewalk around the lake with its manicured trees, I argue with Lidmila about which is better, Wild Nature or Man-manipulated Nature. Lidmila argues that wild nature is horrible without Man’s touch. I argue that Man is horrible without Nature’s touch. We enjoy each others’ conversation because we are 2 very different people with very different views of the world. Which shows in our fiction, her’s a meticulously polished rendering of romance, mine a rough storytelling with occasional pathos. She tells me she has won the argument, simply by showing me the Bois de Boulogne, and what can I say to that?

View of Sacre Coeur Basilica from the Opera

My other writer friend in Paris is Reine, who lives below Montmartre, where the dome-shape of Sacre Coeur basilica draws tourists like ants to a dropped dip of vanilla ice cream. I take the metro to Reine’s place, I take the Paris metro everywhere, if too far to walk, or too cold. Every time I leave the Barbes Rochechuart metro and cross the street on the way to her flat, I am blocked by a stream of African immigrants whose pitch black faces shine like polished shoes – they are fresh from France’s former colonies, come to Paris for work and new lives. As I gingerly pass thru them I turn into a zebra crossing a churning African river full of crocodiles. I am almost out when a crocodile flashes his teeth and offers me crinkly wallets made from the skin of his fellows. On the far side of the street, up the hill a bit, past Tati’s department store for the poor, I spot the McDonald’s walkthru window, and put my hand to my old cowskin wallet, remembering the time I stood in line and a gypsy boy not 8 tried to pick my pocket. I can’t remember the building code to get into Reine’s apartment house, but I can tell by the wear on the keypad the four numbers to use. I try them in different order until the green light flashes and the door clicks. I climb the stairs to her floor – Reine greets me with the traditional kiss on both cheeks.

My writer friend Reine and her daughter Oona, who last I heard has grown as beautiful as the Paris sky in spring.

We walk Montmartre, Reine and I, taking a back way, and find, as night falls, a single home in the midst of all the flats. The warm light in the windows draws us closer, though the curtains hide the interior. We pass on, down a narrow cobble-stone street, wading in shadow, Reine and I, talking of the hidden, the unsaid and the unseen, a necessary conversation to have, but rarely and only with the best of friends. Reine is from the Philippines and carries with her both the grace and the superstition of that race. I tell Reine we humans are like blind worms, but she counters, “No, we are the glow in the tail of the worms.” 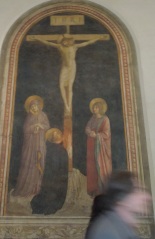 I took the bullet train to Bordeaux, to see my niece Chantal and her French husband Guy. In the flea market there I had the good luck to find an old chain coin purse for $50 (for my daughter Teresa), like the ones which have largely disappeared from the markets in Paris.

Chantal with Guy at a vineyard near their home.

They took me to see their new house on the hill, and then to visit the ancient city of St Emilion:

“St. Emilion is built into a limestone hill, with cobblestone streets and ancient buildings. However, it is what is underground that sets St. Emilion apart. In the 8th century, a hermit named Emilion settled in a small cave with an underground spring. Over the next 500 years the cave was enlarged to make the world’s largest monolithic (one rock) cathedral.”

The guide told us the cave cathedral builders were pragmatic people who realized they could dig a cathedral much easier and cheaper than to raise one above ground, with the added benefit that they could sell the stone they removed while carving out the cathedral! It is an impressive cave/cathedral, but more for worms than Man.

Me and Chantal at resto (note IBM t-shirt)

Next stop – Alba, Italy and then Marrakesh! Notes You can buy Lidmila’s novels from Amazon or Barnes and Noble or smashwords.com. My favorite is The Drowning of a Goldfish, her award-winning first novel. Unfortunately Reine’s books are currently out of print; I eagerly await her labor of love, tentatively titled, What Comes Next.

Featured Books and Stories by Ray Else