I was 29, married with 4 kids, when I finally got my bachelors and went to work as a business programmer for the Sedco Oil Drilling company downtown Dallas. I was green at working an office job – I’d worked mostly in factories and stores before this job. My supervisor, Dave Wilkins, a handsome sophisticated soul a few years older than me, gave me tips on how to succeed in an office setting, while explaining how our department supported an inventory program being installed in the warehouses on Sedco’s offshore oil rigs worldwide (Sedco supplied the rigs fully crewed to oil companies interested in exploring for oil). This support included worldwide travel for our small team, for which I was keen.

(Later, when Dave and I were transferred to Paris, France, Dave would play a critical role in my writing life – but more on that later.)

One of my first trips for Sedco was to a rig in the Mediterranean, south of Tarragona, Spain, to install the new inventory computer (an HP1000) and train up the warehousemen on the new program. After the long flight overseas, Mike, Tony and I flew out in a helicopter to the rig – we would return in 3 days by workboat. 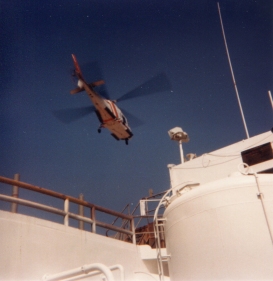 Running onto my first rig, with my head bowed to avoid the chopper blades, I soon learned all about rig life — loud, dirty, tiresome, and dangerous, 24 hours a day, as the day shift and night shift make sure the drilling never stops. The lowest paid crew, doing the most dangerous work on the rig floor and up in the derrick, is mostly local, working 12 hour shifts of two weeks on and a few days off, while the more skilled positions tend to be filled by Americans or Brits who fly in to work 4 weeks on and 2 weeks off. The food, served in mess halls, one for the locals and a separate one for the international staff, tends to be good and plenty. The entertainment is mostly movies in the movie room, VHS tapes of James Bond fare and the like shown on a large TV. No booze is allowed on board, which is both a burden and a boon to many of the crew who otherwise would get drunk after shift and be fired.

I was told to keep aware that a blowout could happen any moment, with explosions and poison gas and metal-melting flame. And since I didn’t know the layout of the rig nearly as well as the regular crew, since I wasn’t sure always how to get to my lifeboat, I worried that if we did have a blowout I would surely die.

I hated being onboard such a loud, oily, dangerous place full of redneck types with which I had little in common, sharing a tiny room with 3 others, knowing I couldn’t get off until the crewboat came back in 3 days. I mentioned how claustrophobic and trapped I felt to Mike, an old hand at rig visits. He advised me to look only as far ahead as the next meal. Forget about how many days left, forget about the boat. Focus only on making it to the next meal. And that’s how I kept my sanity and got through my first stay on a rig – one meal at a time until the boat came and Mike, Tony and I were ferried, finally, to the relative safety of shore. 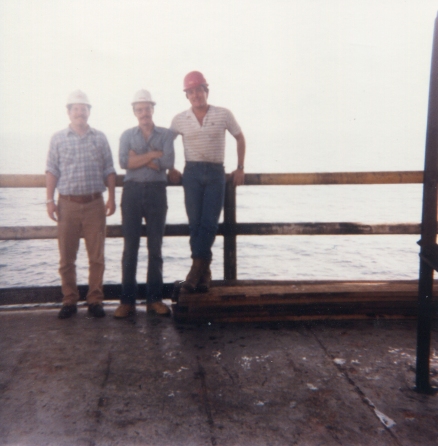 That’s me on the left, with the mustache

The Spanish taxi driver who picked us up at the docks that afternoon asked, “Where to?”

Tony said, “Where there are pretty women.”

This was an unexpected detour – I had been looking forward to a real bed in a nice hotel, before the flight back to the states in the morning. But I played along with Tony’s decision to party our last night in Spain.

The driver dropped us at a kind of tavern on a winding road overlooking the sea. We went inside the crowded, smoky place, up to the bar. Three women in low-cut dress approached us – the taxi driver had told the truth, the women in this tavern were gorgeous. And more than that, they were for rent! Tony bargained with them and left with the prettiest. Mike and I passed, “Maybe later,” we told them, and proceeded to get drunk. Tony came back downstairs after a while and had a drink with us. Then, feeling sorry for the 2 girls Mike and I had turned down, he went upstairs with the two of them.

This was my introduction to rig life and travel with rig people, where I learned that the trick to surviving the unbearable in life was to focus on surviving only so far as the next meal, or, as in Tony’s case, to the next brothel.