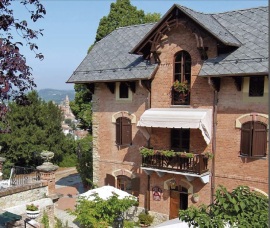 My old high school friend Mickey lives in Sydney and I mentioned to him by email that I would be in Paris the summer of 2011 and that it could be nice to meet there after so many years.

He replied that by coincidence he and his wife Lanie would be in Alba, Italy, a picturesque village in the hilly northwest, in the summer and why don’t I come down from Paris for a couple of days and join them there. I said “Sure!” foolishly assuming it would be a straightforward trip. I found out differently. 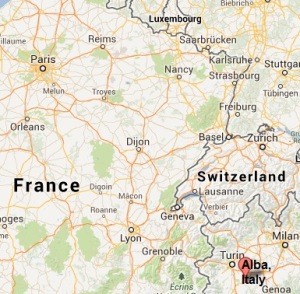 Paris, France to Alba, Italy – took a plane then a bus then 2 trains then a taxi!

After studying the best route from Paris to Alba, I flew from Paris to Torino (Turin), took an hour bus-ride downtown, and from there I intended to buy a train ticket, only I couldn’t find the Porta Nuova Train Station. I circled the area where I’d been told it would be, suitcase in tow, and could not find it. I even asked a shopkeeper for directions, but to no avail. I was on the point of panic, questioning my tracking skills, when finally I spotted the tiniest of signs “Porta Nuova =>” pointing out a dark crack-of-an alley between 2 buildings. I went thru the crack and sure enough, a full blown train station magically appeared (Harry Potter’s train station came to mind.)

Next problem – the ticket sellers, two middle-aged men who did their best to ignore me, finally answered my English questions about a ticket to Alba with fast Italian which I did not understand. I asked again more slowly – they answered even faster in Italian, and shook their heads, wanting to be rid of me so they could get back to doing nothing. After several tries I finally figured out they were telling me that there was no direct train – that I would need to change trains in Cavallarmaggiore.

I bought a ticket, a snack and climbed aboard, and enjoyed the train ride to Cavallarmaggiore, but there I had another hiccup. Sitting on the second train, the one to Alba, I was told by the ticket checker, in sign language, 2 minutes before the train was to leave the station, that my ticket needed to be punched in the station. I wanted to ask him why he couldn’t just punch the ticket for me, but my sign language wasn’t that good and the clock was ticking, so I grabbed my bag and sprinted from the train, into the small station, punched my ticket in the ticket punching machine and leaped back into the train car just as it pulled away. The ticket checker came over to me, as I sat there breathing heavily, wondering if my heart was going to burst, he came by me and made sure my ticket was punched – I guess elsewise he would have thrown me off the train!

Arriving in Alba, I studied my hand-drawn map of how to get to La Favorita on a hill overlooking the city a couple of miles away, and decided I did not want to risk getting lost so I hired one of the two taxis sitting at the tiny train station.

The taxi left me at the gate, which was locked. I pressed the button next to the gate, and announced myself. The gate opened. Halfway up the drive I saw a gray haired man heading down towards me; it was Mickey. What a shock after 30 years. 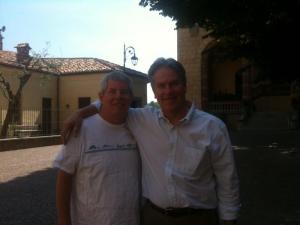 Me and Mickey, high school friends, met in Italy after 30 years

He wasn’t that kid I’d known anymore, but a somewhat wizened, worldly businessman. Of course I must have looked somewhat the same to him! We embraced, and laughed. We’d made it, in more ways than one. Two reckless, Texas boys. Two friends who in their late teens and early twenties had done a lot of wild things together, never intending to live beyond 30 and certainly not ever intending to be successful enough to afford casual trips to places like Italy.

We sat down at an outside table where Mickey’s wife awaited us. The owner brought out cheese and a bottle of wine with glasses. The teenager we were in 1973, still in the core of each of us, shook his head, somehow aware of this meeting in the future, at this bucolic B&B in the rolling hills of northern Italy. We toasted those kids looking on from within us, those wild boys from the past.

The next day we toured the area by car – hills covered with vineyards, small villages with ancient churches. There did not seem to be any other industry, just wine making and preserving the old way of life.How long could they keep that up, I wondered? Won’t the Chinese eventually take over the manufacture of wine like everything else?

Mickey explained to me that they had come to Italy to pick up a custom made shotgun for Lanie, who had taken up the sport of skeet shooting. 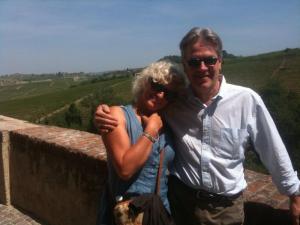 Mickey and Lanie took me on a car tour around Alba, Italy

I shook my head at that, as Lanie, when I met her so many years ago, was an artist and worked in the pet section of Sears. Who was this older Lanie who liked the kick and roar of a rifle blast? I guessed I just never really knew her that well back then.

I left the next day, but would see them again in 2012, at their horse ranch in Sydney, where Lanie nearly killed Mickey and me while taking shots at a fox making off with one of their prize chickens.