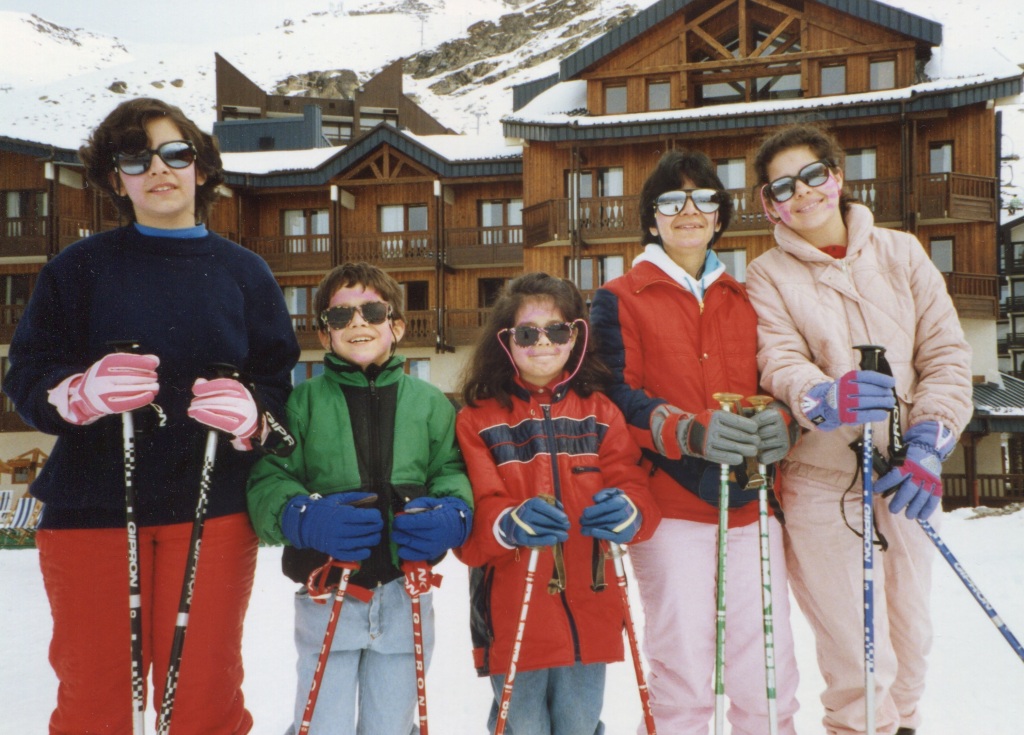 Most winters in France we made for the mountains at least once, skiing places like Val Thorens, Les Rousses, Zermatt, and some nameless resort we stumbled onto while crossing the Pyrenees. Several of these resorts were high above the treeline, with vast wide slopes that seemed to go on for miles. 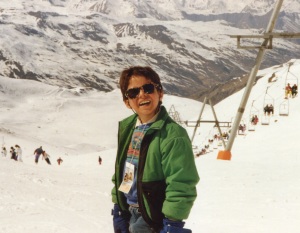 Oscar was a speed demon on the slopes. Note no trees.

One summer I took Veronica and Frances to the south of France, and on to Pamplona, the city of the running of the bulls, popularized by Hemingway. We ate tapas there, and visited a bullring. Another time we went as a family to Barcelona – only a 9 hour drive from Paris – and marveled at Gaudi’s Sagrada Familia Cathedral. 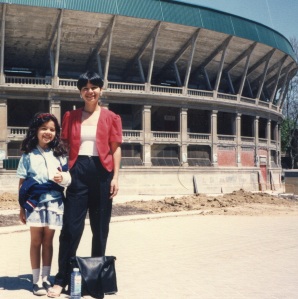 Frances and Veronica visited Pamplona with me in 1991 – here they pose before a bullring. Note Veronica’s broken arm. She managed to break her ankle in Paris too!

My travel for work stayed interesting as well – they sent me to Pakistan on the eve of the (first) Gulf War, to install SICS on a couple land rigs in the disputed Kashmir region. I stayed over a day in the company safe-house in Islamabad (near the Afghan border), a depressing colorless place, as I waited to see if the trip to the rig would be green-lighted. We watched CNN that evening, and things looked grim but still no war so my trip to the rig was on for the morning. I remember going to my room and looking out the window, below ran a polluted creek, above I spotted a raven in a bare tree picking at the flesh on what looked to be a human bone. Opium (from which heroin is made) grows wild here, in this dread-inspiring place at this dread-inspiring time, as papayas do in Hawaii and cashews in Panama. 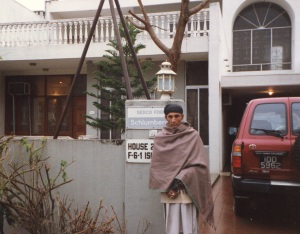 Schlumberger rig staging house in Islamabad, Pakistan, 1990, where I stayed a night waiting to see if war would cancel my trip to the rig. The fellow in front was the “houseboy”.

Took a few hours across highway, mountains and high dry desert to reach the rig compound. 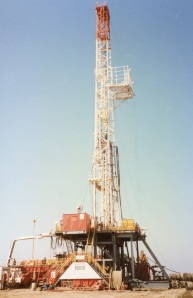 One thing that struck me as being out of character in this largely humorless place, were the buses and work trucks. Even the lowliest of them were fervently decorated – I’d not seen anything like this in any other country – they reminded me of the glitzy decorated tin boxes I bought in Marrakesh, only these “boxes” were on wheels and weighed tons. 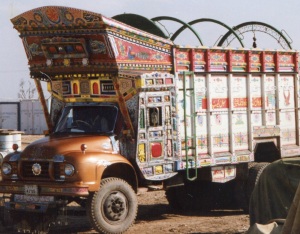 The US attacked Iraq’s army in Kuwait my second day at the rig. I watched the news that evening in the TV/meeting trailer. The newscaster, a woman wearing a black scarf, explained to us viewers that the United States of America was murdering millions of innocent men, women and children. She asked us to pray for our Iraqi brethren being ruthlessly slaughtered. (On US TV later I would hear that, with our pinpoint bombing, not a single innocent person was killed – I believe the truth lies somewhere between the two biased broadcasts.)

At night I envisioned the planes I had watched at the Air Show in Paris, only this time they were dropping bombs in a country not too far away. And I envisioned the burning derricks in the oil fields of Kuwait, derricks that looked like the Eiffel Tower. It all swirled in my mind, tried to form a story, eventually I would use it. That’s what a writer does, as Dave had explained to me. A writer tries to make sense of it all.

In Kashmir, a highly religious region of Pakistan, where the only education the people receive was from their imam, I was warned by my warehouseman-students not to stand outside much, and to not take pictures of anyone. For the local townspeople living near the rig had spotted me, knew I was American, in league with the Devil, and they feared I would somehow steal their souls. To show me they were not superstitious themselves, the warehousemen, who were not local townsfolk, let me capture their souls as shown below. 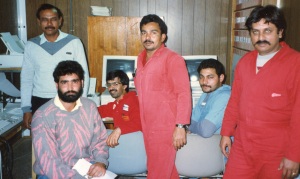 Pakistani warehousemen I trained in 1991: Shahid, Lazarus, Altaf, Mansoor, Mohammed and Paul on Rig 15. Paul was from Karachi, in the south of Pakistan, “a real city of educated people”, he told me, “You must visit me there one day to drink a beer together.”

At the end of my 3 year contract, I hired on permanently with Schlumberger. I received a 5 year “greencard” from the French authorities (I already had a French Social Security number, and so am eligible for generous French retirement benefits). We moved to a nice house in the Paris suburb of L’Hay les Roses. To allow us to take not only train but also car trips, I bought a used Honda Civic (with standard transmission) for 12,000 French Francs (about $2,000 dollars). To get a French driver’s license I had to attend driving school – my instructor chastised me for not driving aggressively enough in Paris traffic, “You are a danger to all the other drivers who expect you to drive aggressively like them!”

Eventually I learned to drive aggressively – I got my license and we went on driving trips, to Italy and Spain. Too I continued to visit rigs in foreign countries (like Nigeria where I was carjacked, boatwrecked, and recruited by the CIA – but that’s another post to be). Slowly Paris became a bit same-old, same-old, as all places do in time. The longer you stay in a place, the longer you “learn” a place, the brain slowly goes on automatic, it needs only a tiny bit of itself to get you through the day, no longer triggered by what was once new and wonderful, no longer struggling to understand the language and the customs, as we do when we are toddlers. The brain goes on autopilot, and boredom arrives.

Was it time to move on, move on as my older brother Steve had done (after a couple years as Military Attache at the American Embassy in Paris, a couple years giving parties every week to make contact with other attaches and consuls, to make international contacts and possibly get information slips from them after they consume one too many free bottles of red)?

Steve had moved on to Germany, with his first wife and his daughters Shani and Chantal. My own inclination was to return home.

After 5 years, bored with my job and bored with Paris, I decided both I and the kids would have more opportunity, richer lives, if I returned the family to the US. I gave notice. When you give notice in France from a high-skilled position like mine in France, the last few weeks (as dictated by the Commite de’Entreprise/Employee Union) you are allowed time off to go look for new work.  So we crammed into the Civic and took the ferry to England, to “look for work” in London and at Stonehenge (where the circle of stones gave off a vibe of mystery and antiquity, but no job offers) and we “looked for work” at Shakepeare’s birthplace Stratford-upon-Avon (I will never forget the peaceful beauty with the graceful white swans on the water; but alas, the swans too were not hiring). After our tour of England, and several long walks around Paris to say goodbye to the most beautiful city in the world, we flew home to the States. 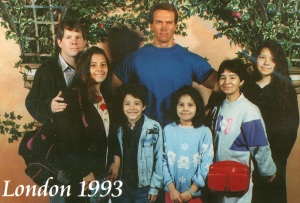 The return to the USA was a huge culture shock for me and the kids – I missed the easy travel to so many different countries, each with their own language and culture (and I sensed an even stronger disconnect with fellow Americans than I had felt before I left)  – I think the kids missed mostly the privileged upbringing they left behind in Paris. Frances, I think, felt right at home, as more and more Mexicans had flooded the Dallas area.

After getting my Master’s in Technical Instruction, I eventually hired on with a company called UniData, later bought by IBM, where I continued specializing in coding and mentoring customers.

I enjoyed being a speaker at several conferences for IBM and later Rocket Software, in places like Las Vegas, Orlando, Denver, Sydney, and Kuala Lumpur.

From traveling around Europe and the world for Schlumberger, I ended up traveling all over the US and a bit around the world for IBM (and later for Rocket Software). My risky roll of the career and family dice in going to Paris, and then returning from Paris, paid off with many trips experienced and many tales to tell.