I am not going to tell you the history of Saint Petersburg, Leningrad, City of Heros, a city that withstood, during World War II, withstood for two and half years mind you, siege and bombardment. A city of people that would not surrender to the invading Germans, even though 1 million of their people died from the bombs or from starvation or from the bitter cold of 2 winters with no electricity and no fuel to burn. A city of wonderfully stubborn individuals.

And I don’t want to tell you about another city, a city that Russian Czar Peter the Great envisioned, in 1703, after visiting European capitals like Paris. And from a swamp around the Neva river on the coast of the Baltic Sea, he created this marvelous city according to that vision, despite everything, a city called St Petersburg, then renamed Petrograd during the communist purge of religion, then Leningrad, then St Petersburg again after the cold war.

Hermitage museum, founded in 1764 by Catherine the Great as a private museum – opened to the public in 1852

So let me begin:

On my first day in Petersburg, I had a long wait for a taxi at the airport with another American, a long wait due to the 2 day G20 Economic Summit which had brought to the city 20 of the world’s leaders to discuss things like competitive devaluation of currency.

Finally the other older American man got in a taxi and I got in mine, and my adventure in the city began.

The city center lies on the south bank of the Neva River, while canals like this run thru the city

After settling in my hotel, the Happy Pushkin, named after the Russian poet Pushkin who lived a couple of his happiest years in the building, and wrote some of his best work, I set out on a long 4 hour walk traveling to different church spires and taking pictures. On the sidewalk in front of me I heard “So you got here OK, then?” It was my fellow traveler from the airport taxi stand. I greeted him, thought it quite a coincidence to run into him, and said goodbye. He looked me in the eyes before I turned away and said with absolute confidence “We will meet again.”

I told myself as I walked away, this is an interesting character – I should have spent more time with him. If I do meet him again I will certainly do so.

The next day I visited the Hermitage Museum, one of the largest and oldest in the world. There I saw wonderful portraits, Impressionist paintings, and religious icons (paintings on wood, often tinted with gold)and reliquaries (small containers meant to hold a tiny bone or hair from the body of a saint; thought to have holy power). 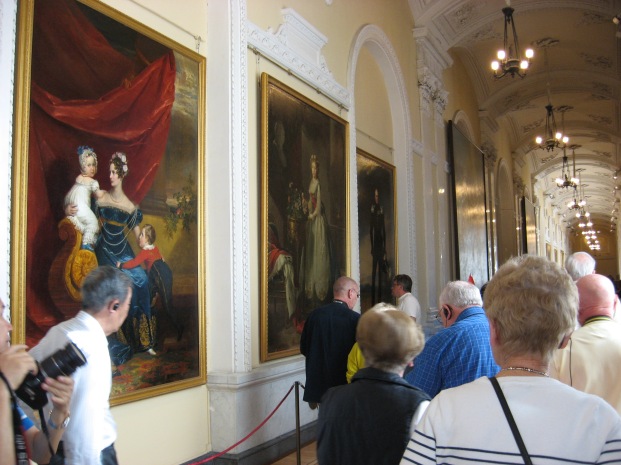 One of the many halls of portraits in the Hermitage 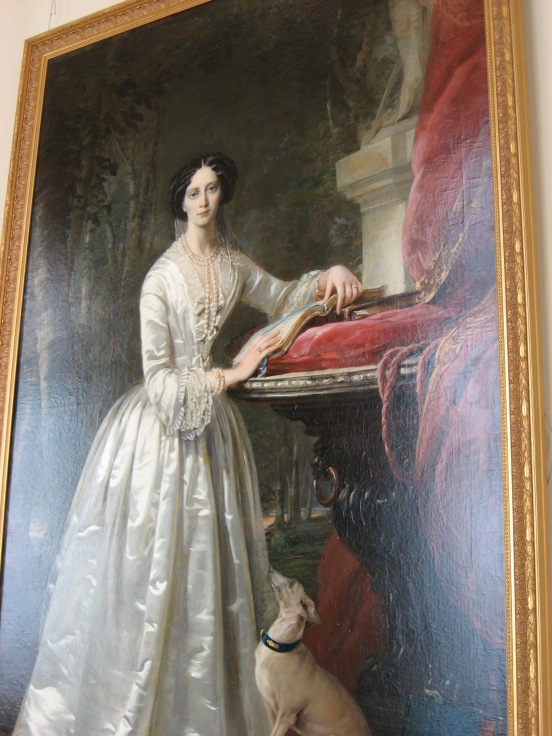 Royal woman with her dog 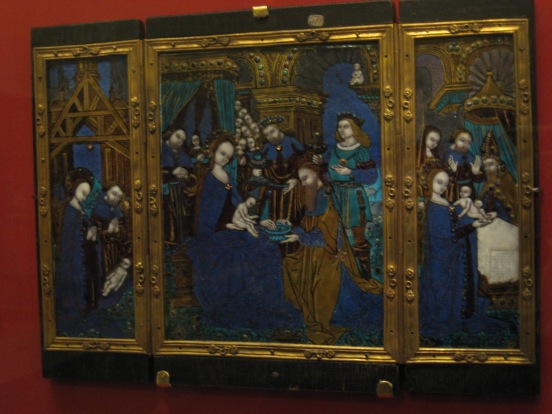 An ancient cameo-like religious triptych from the Middle Ages

I tired of walking the many halls of the museum, and decided to head back towards my hotel for lunch and a rest. I passed the enormous Isaac Cathdral, where I saw a bride run across the street.

I have seen so many brides on this trip. I snapped her picture as she walked away, and continued along a parkway dividing an avenue. On a side street off Galernaya Street, a few blocks from my hotel, who should I run into coming the opposite direction. My fellow American traveler.

“Hello again!” he said. “So are you an agent tailing me?”

“You know, meeting you again,” I told him, “it’s as if life is insisting ‘Here is a man whose story you must hear.'”

“The Greeks said that is the best kind,” I said. “Look, I was going to lunch, would you like to join me and tell me your story.”

“Let’s,” he agreed, and we set out back towards the city center and the restaurants, with him explaining on the way that he has signed up for a semester of Russian at a state university, and is looking for a Russian family to take him on as a border. “Once I was rich, but I squandered it all on bird watching tours around the world when I was younger.”

Yes this was a man with a story, even more than one. “I myself spend money on crystal rock hounding,” I told him.

We entered a place at random, I believe it was called the NYC Club. He ordered some kind of salad of liver puree and a soup. I ordered mutton meat balls in tomato sauce with mashed potatoes. We both drank water, still.

“So tell me why you picked Russia, of all countries, for an extended stay?” I asked him.

“I first came to Russia to spot birds,” he told me. “In Siberia there is unimaginable wilderness, with wildlife you would not believe. We would come to a stop and there would be 10,000 butterflies. Where else can you see that?”

I remembered the time on one of my many long drives to Mexico, where in the scrubland south of San Antonio, I stopped at the side of the road and thousands of white butterflies the size of fingertips rose up from the ground as if they were going to merge and form the shape of a larger beast, but already he was off telling me more interesting things.

He told me he is from El Paso but he lives in Missouri, that he was living with his sister, taking care of her dog dying of cancer. “When you care for someone like that,” he told me, “you either come to hate or love them. I came to love the animal.”

He told me how he had been cursed at for not having the dog on a leash, yet the tumor on its neck wouldn’t allow that and he became very defensive and almost had a fistfight with the man in defense of the dog and its illness.

He told me he is 67, his name’s Ed, and that a few years back he cared for first his father, then his mother, who both died from Alzheimer’s. His father had turned violent in the end, and they had to keep him on tranquilizers. When his father realized he had been brought to an old folks home, Ed said the old man had turned on his wife, saying, “What a dirty trick you’ve played on me.” He told me that taking someone to an old folk’s home is one of the worst feelings of betrayal. Yet often it is the only choice. “They drug the patients up so they won’t have to take care of them. And they give them morphine, later, too much morphine. They overdose them, a kind of mercy killing, but perhaps that is OK.” He wishes he had never been a part of the decision to take his father to such a place. Later Ed’s father referred to his own wife as “That woman.”

I told him my father has Alzheimer’s, and yes I may be called on to help with his care, and one day make the same decision. “When I look in his eyes,” I tell Ed, “I can see some of him is already gone.”

Ed tells me that my father will return to me, whole, in memory, after he passes.

“I like the stubborn individuality of the people.” And he told me about Russian giants, huge men with enormous muscles, he told me about a particular one he met on a bus who was one of the wisest, kindest men he ever met. “And now the sad part.”

“You see, a few years back I had an xray done of my jaw, and there was a growth, like a spreading chain of interlinked dendrites. My dentist had never seen anything like it, and told me to see a specialist. But I wanted nothing to do with specialists who gladly dig into your skull, to practice their knife skills. Only later, when the pain attacks across the back of my skull began, did I almost go. But no. I can live with pain. I am quite good with pain.”

“I think you should see a doctor,” I told him. “They might be able to fix whatever it is you have.”

“No,” he repeated. And I could see the loneliness suddenly in this man. This man who traveled, to feel alive. “I knew a man who had brain surgery, and was left a vegetable. I intend to live my life as if nothing is wrong. Only yes, sometimes I get depressed.”

There was a pause.

“They, the university that is, are having trouble placing me with a Russian family. Who wants a 67 year old boarder?”

I gladly paid the bill, after a couple hours of talks covering the rise and fall of Rome, and the evolution (and potential) collapse of civilization, and the origin of language, and the difficult word transformations and pronunciations in the language of Russian. On the sidewalk outside he told me a final story.

You see, his father had had a cruel father himself, and when Ed’s father broke his finger playing baseball as a boy, he was taken to no doctor. Ed’s grandfather was too busy, too uncaring. The kind of man who beats his wife. So the finger stayed crooked and useless the rest of Ed’s father’s life. Yet this man, Ed’s father, who would later turn violent with Alzheimer’s, was the most gentle of fathers, a man who forgave his own violent father all his sins. And when Ed’s father died in bed with his children around him, when his body was just turning cold, for some reason Ed reached under the cover, he couldn’t help himself, to touch the crooked finger, this symbol of his father’s true spirit. And Ed’s sister, knowing what he just did, asked him, “Is it still there?”

Shouldering the load of life