Here I am, first day in Tokyo, visiting Senso-ji temple only to be interviewed by school kids practicing their English. They were fascinated by my cursive English signature, so different from their written language.

Why Japan? Well I have always liked Zen philosophy (though I admit I do not fully understand it), and the code of the samurai and recently I have been reading manga (Japanese comic books) from the Half Price Book store and watching anime (Japanese cartoon series) on Netflix. I seem drawn to the Japanese esthetic at this point in my life, so I decided to set my next novel in the First Kiss Mysteries in Japan. To get a better feel for the country and the culture, to get the atmosphere right in the novel, I took some vacation and went to Tokyo and Kyoto.

On my long walks about town I discovered that a Japanese man or woman will not cross a street crosswalk until the pedestrian light turns green. Even if no cars are coming. And a car will never run through a crosswalk that has a pedestrian. I read somewhere that the Japanese are the most civilized of people, and perhaps this is a sign of that, but again and again, as I waited for the light to change with no cars in sight, all I could think of was: “These are minutes of my life ticking away!” I felt like yelling at them, “Let’s just go! There’s no cars coming!” Whether they understood English or not. But most often I just stood there, sheep that I am, and waited for the light to change and crossed with my little civilized Japanese companions.

In Tokyo I stayed in a ryokan style hotel. Ryokans have quaint rooms with bamboo mat floors and no furniture except a tiny squat table. The bed is a futon mattress and cover on the floor. Typically no private bathroom but I paid extra to have my own. Now I don’t know how often you have had to sit on the floor of your room to try and type on a computer for a few hours, but let me tell you, it is torture. Especially on an old man’s back. So a little advice to the traveler – don’t get a ryokan room if you like sitting in a chair to eat, read, do computer stuff or watch TV (actually you won’t be watching much TV – Japanese channels are worse than French ones). Well actually there is one place to sit, and a fine heated chair indeed – the heated, bidet toilets.

The seat was toasty!

As mentioned, I like some manga and bought what I thought was a manga (was wrapped so I could not look inside) at a store downtown, only after opening it I realized it was a novel. The Japanese writing, falling from top to bottom, looks like exotic rain.

I spent my first day in the Asakusa area (most areas in Tokyo are known by the metro station of the same name), visiting the Senso-ji temple and shopping and people watching in the street that leads to it. I discovered that Tokyo schoolgirls do dress like sailors, and that the Japanese make strange (but good) candy out of things like bean paste and rice pudding.

My next prowling ground was Akihabara, next to the, you guessed it, Akihabara metro station. Akihabara is famous for manga, anime, computer games, pachinko and slot and game halls.

Entire buildings are covered in cartoon characters, and ads for upcoming anime movies. 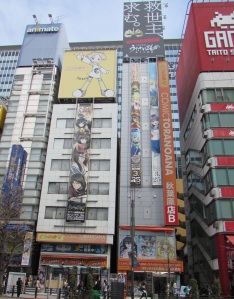 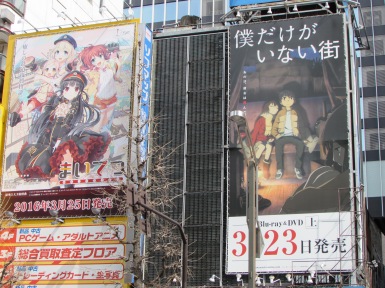 Small plastic pose-able cartoon figures sold like hotcakes at $30 to $1,000 a pop (the best, most popular ones always sold out). You could however try your hand at winning one for 200 yen a pop in one of the claw machines.

Speaking of food (weren’t we?), there was lots of seafood around – including my favorite tempura.

Shrimp and Veggie Tempura with miso soup. I entered my order on a screen at the front of the resto, paid the machine, then a server took my receipt ticket and served me.

I enjoyed Tokyo, but looked forward to moving on to Kyoto, the ancient capital, on the bullet train. And a chair that wasn’t in the bathroom. Be sure and click here for my Kyoto post – lots more Japanese food and old culture.

Bought this figure for 6500 yen (about $50). Came with 3 different faces/facial expressions and replaceable hands.