A different kind of Frankenstein. Einna is a lot like other teenage girls, naive, idealistic, secretive, disobedient and interested in boys. Only Einna is not human, she is an A.I. android. Her creator, her mother, is Manaka Yagami, the first female tech billionaire. Einna has a plan to make herself human, if she can keep Mother in the dark and avoid the clutches of the notorious Yakuza.

The time finally arrived for me to take my grandson Andrew on his first architecture trip. We spent most of our time in Morocco, staying in Casablanca with an old friend of mine and his family in their new home, and in the ancient city of Fez and the remarkably beautiful city of Chefchaouen (known as the Blue Pearl). Too we viewed the Roman ruins of Volubilus. We finished our trip in London.

My friend Noureddine’s new house in Casablanca. Andrew appreciated the modern look. Large glass doors in back open to an in-ground pool with wooden deck.

The first night we went to eat at a replica of Rick’s Cafe, from the Humphrey Bogart film called Casablanca. After dinner we met the owner who came up with the idea for the restaurant about 10 years ago. In the baccarat room the movie was playing continuously, while a jazz band played in the interior courtyard. Nice atmosphere, good food – and a nostalgic place for me, though not for Andrew who has not seen the film. The next day we visited the enormous mosque Hassan II, built with titanium to last forever. 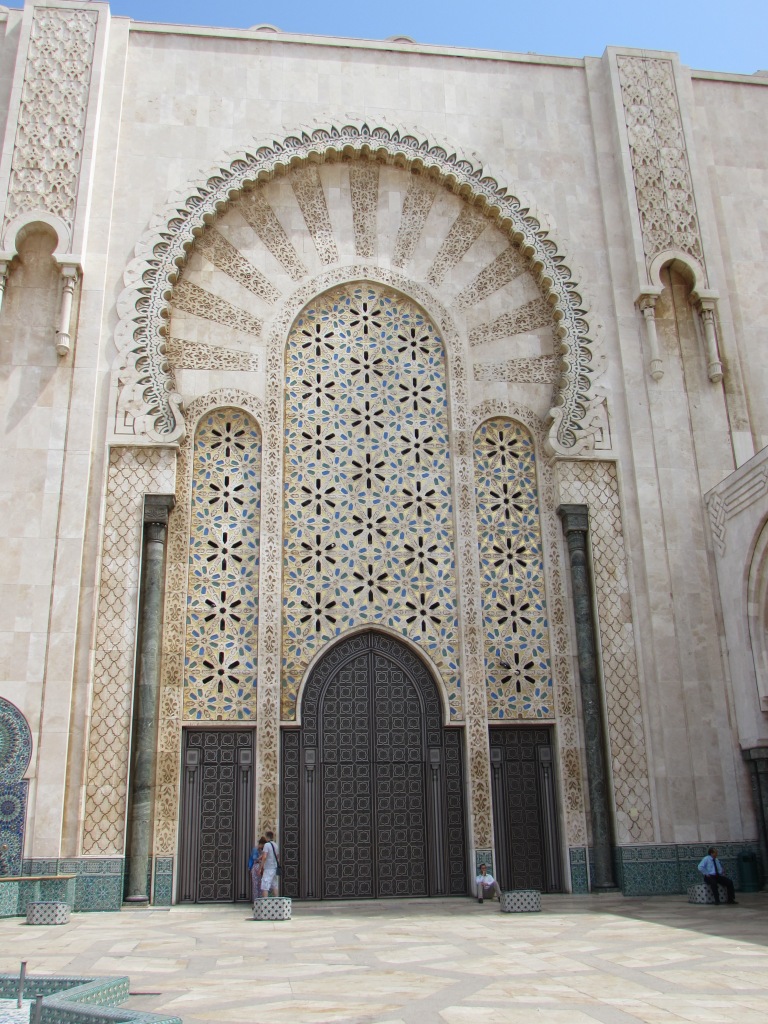 The new Hassan II Mosque in Casablanca can hold 20,000 worshippers.

A four hour tollway drive got us to Fez, founded by the son of the founder of Morocco in 789. The old city center, the medina, has all the ancient flavor of a place that old, with interconnected maze-like walls of shops and souks and doorways. Behind the doors are simple homes or large mansions called riads.

Downtown Casablanca with Noureddine’s son Ayman 14, his daughter Yasmine 17, Yasmine’s friend also called Yasmine, my old colleague and friend Noureddine, and my grandson Andrew 12. Ayman and both Yasmines go to a public French school in Casablanca and speak French, English and Arabic.

We did a half day tour of the medina with a tall local man in a white robe (a djellaba) and a red fez hat. He explained to us that the medina is horseshoe shaped, one half going down in steep stone often covered paths to the river, the other half rising steeply back up. He wasn’t kidding, going into the heart of the medina you go down down down, past shops and donkeys hauling water, past little kids playing and many people simply sitting on the shopfronts or standing about, watching the day go by.

The medina (old city) with its souks (shops and markets)

Easy to go down to the river, tough coming back up in the heat of the day. 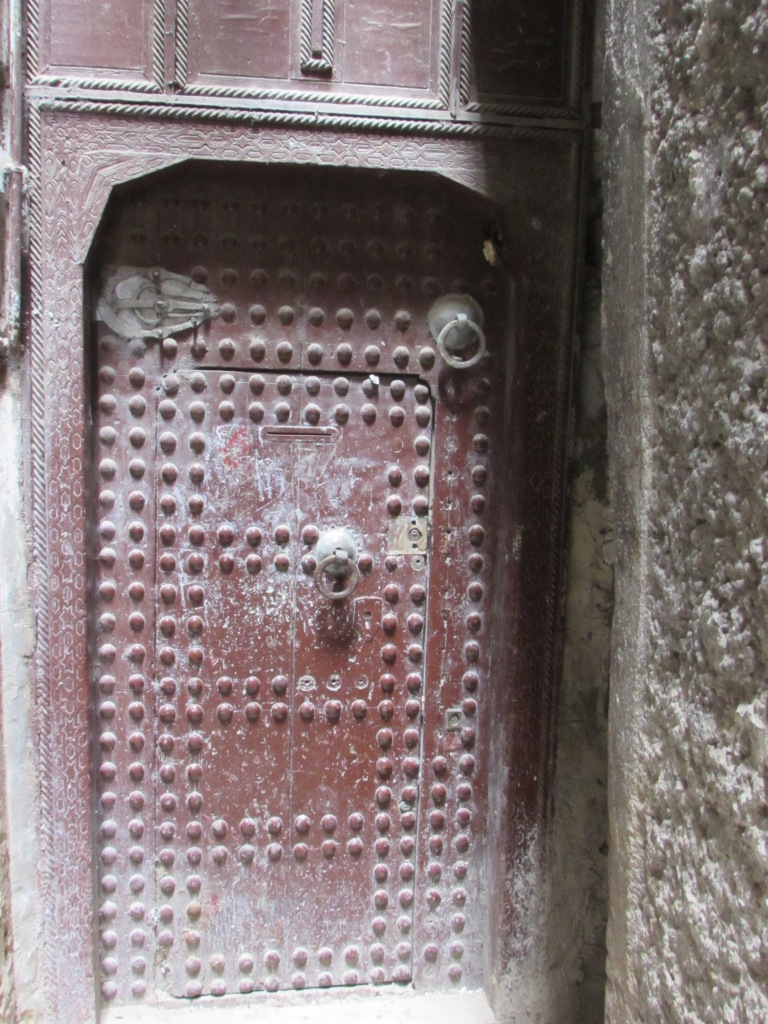 Wonderful old doors like this are typical in medinas in Morocco like in Fez and Marrakesh. Behind this door could be a simple rooms of a family house or a mansion called a riad complete with an interior courtyard with fruit trees.

Many back lanes and steep walks – a bit scary at night, and easy to get lost in.

Noureddine, Andrew and me eating at a riad.

Chicken pie (with cinnamon and powdered sugar) for me, a seven vegetable tajine for Noureddine and a lemon chicken dish for Andrew. These is typical Moroccan food offered by most good restaurants, along with couscous.

We visited the first university in Morocco, now a mosque, and an ancient tannery where the men still work the leather in acid and dye pits as it was done a thousand years ago. In the tannery the salesman tried to sell me a leather coat – insisted putting it on me, telling me how good I looked in it. “Oh that coat is perfect for you.” [was actually too small] The fact that it was 100 degrees Fahrenheit and I was sweating like a pig in the coat also made me disinclined to purchase – in fact I would have paid him money to take it off me sooner! I finally wiggled out of the coat and gave it back, much to his disappointment. To placate him I bought a nice leather belt for 300 dirhams. I guess the salesman felt bad about charging me so much, expecting me to hassle more – as we walked to the cash register he whispered – “Just give me 250 dirhams.” (25 dollars) 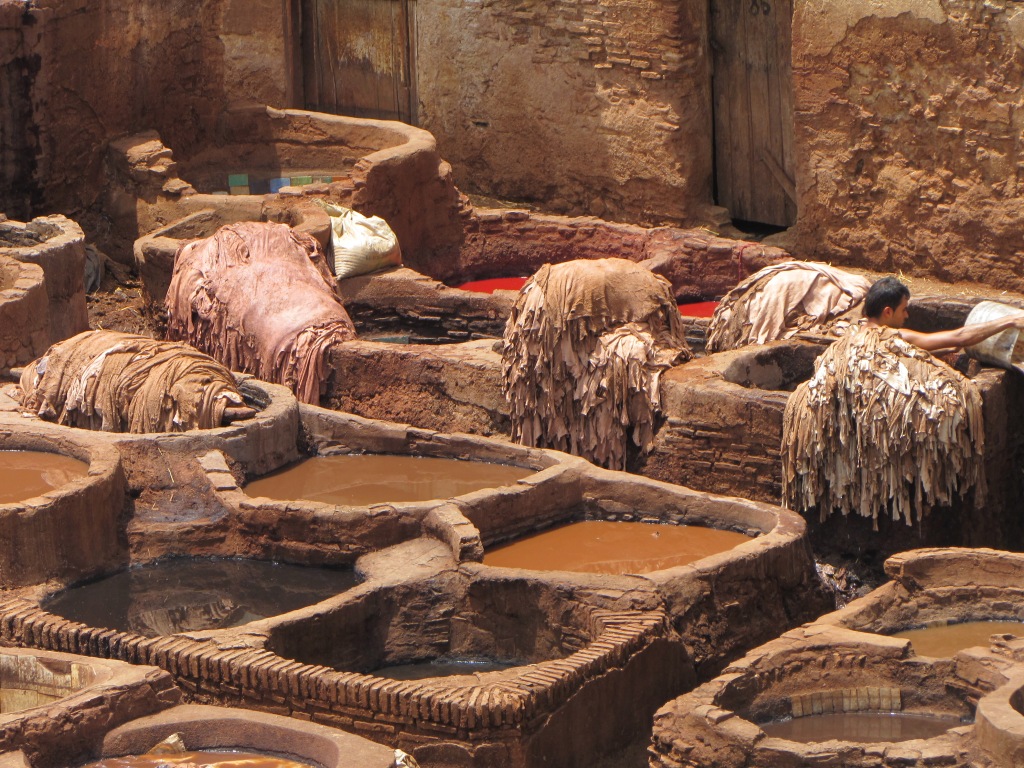 We stayed at a beautiful riad in Fez, but after 2 days we headed north towards Chefchaouen, in the Rif mountains, stopping only to visit the ancient Roman ruins of Volubilus. Volubilus is an interesting place, used for thousands of years as an olive (oil for cooking and for lamps) and wheat growing area for the entire Roman empire. Such an important place, even the Roman Emperor Hadrian visited here.

Noureddine, Andrew and me at Volubilus, 2,000 years after the Roman Emperor Hadrian visited

The long abandoned city was largely destroyed by a devastating earthquake in 1755, and has been rebuilt to some degree, with original Roman mosaics being the most impressive things to see. Andrew liked the communal bathroom stalls, and the Vomitorium where the rich Romans would go to vomit after dinner so they could eat more dinner (and then vomit and eat still more). Our personal guide (cost 150 dirhams) told us the Romans were small people, only shoulder high to modern Americans, but ingenious and expert at warfare.

The road from Fez to Chefchaouen is mostly a winding two lane road through rolling hills of olive orchards. The drive takes 5 hours even though Google maps says 2 and 1/2 hours. 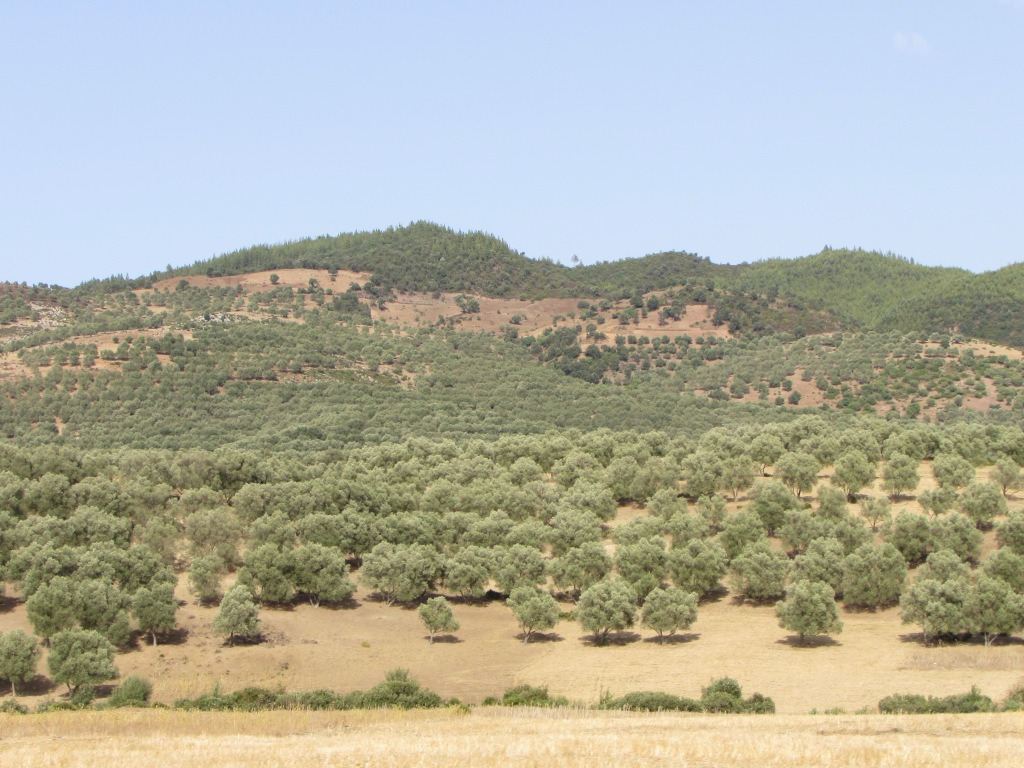 Chefchaouen, a smaller town on a hillside, is much cooler than Fez, with walls and doorways painted in shades of blue making the city unusually beautiful and photogenic. At the heart of the medina is the original Kasbah fort built by the founder in 1471. A wonderful walking city. That night we watched a chess tournament in the main plaza in front of the Kasbah. 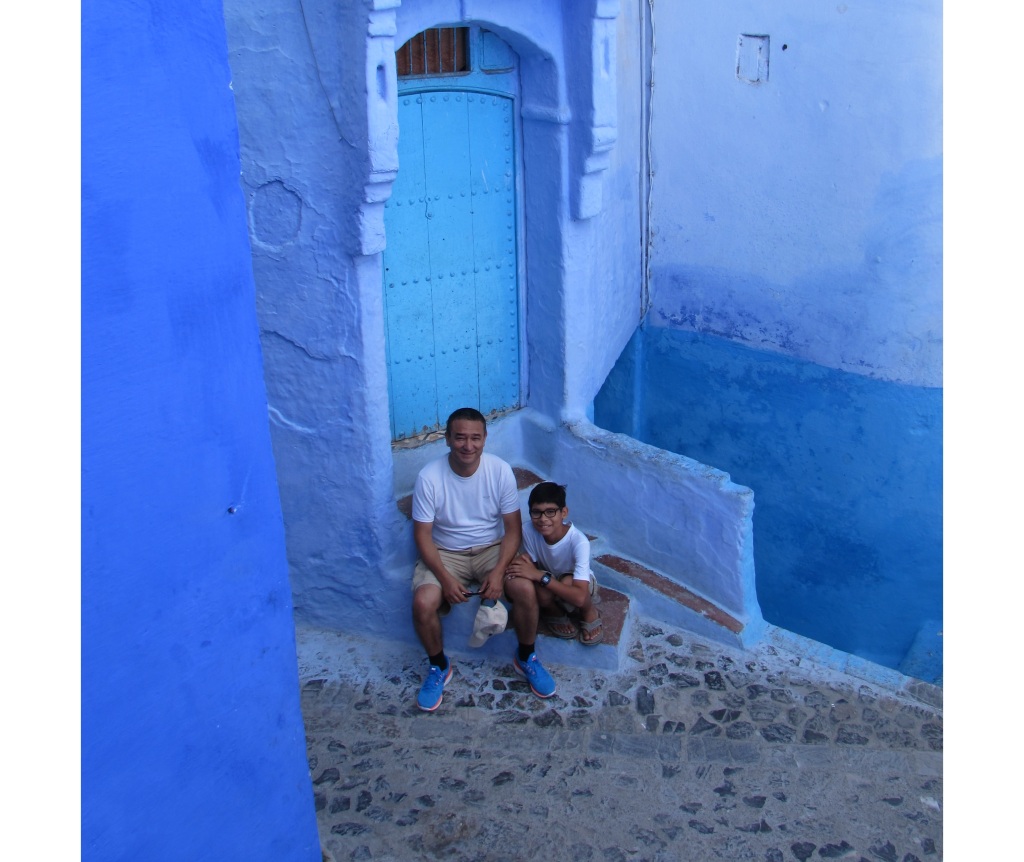 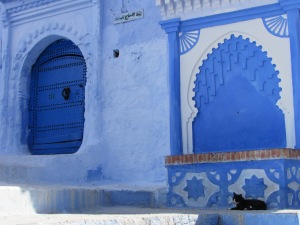 I had my first hamman (steamroom sponge bath) at our hotel in Chefchaouen called Lina Ryad. Wearing a bathrobe and my swimsuit, I entered the large, darkened bath area with granite beds along the walls. The woman had me remove my robe and lay on my stomach on the hard granite. She then sprayed my back and legs with just bearable, steaming hot water. I feared I would be burned but no, the water was just below that temperature. After hosing me down, she rubbed my back and front with a black soap, and left me to lay there for about 15 minutes. When she returned she scrubbed me with a kind of bristly loofah. My arms, legs, front and back. I was a child again and my mother was giving me a good cleaning! She even shampooed my hair. Then she applied a special enriching masque to my skin and left me again for 10 minutes in the steam. Lastly she rinsed me and sent me on my way, happy with the 70 dirham (7 dollar) tip I gave her. Andrew was impressed by my baby smooth skin. Even days later I notice the softness, of my skin and my hair.

After 2 days at the Blue Pearl, we drove north to the coast where we could see Spain across the waterway, and caught the tollway back to Casablanca. A good adventure for Andrew and me, and a good time with my friend and his family.

We feasted on couscous with Noureddine and his family our last day in Casablanca. Noureddine’s daughter Yasmine is on the left and Noureddine’s wife Farrah is on the right.

Below are extra photos from the trip, from Paris and London: 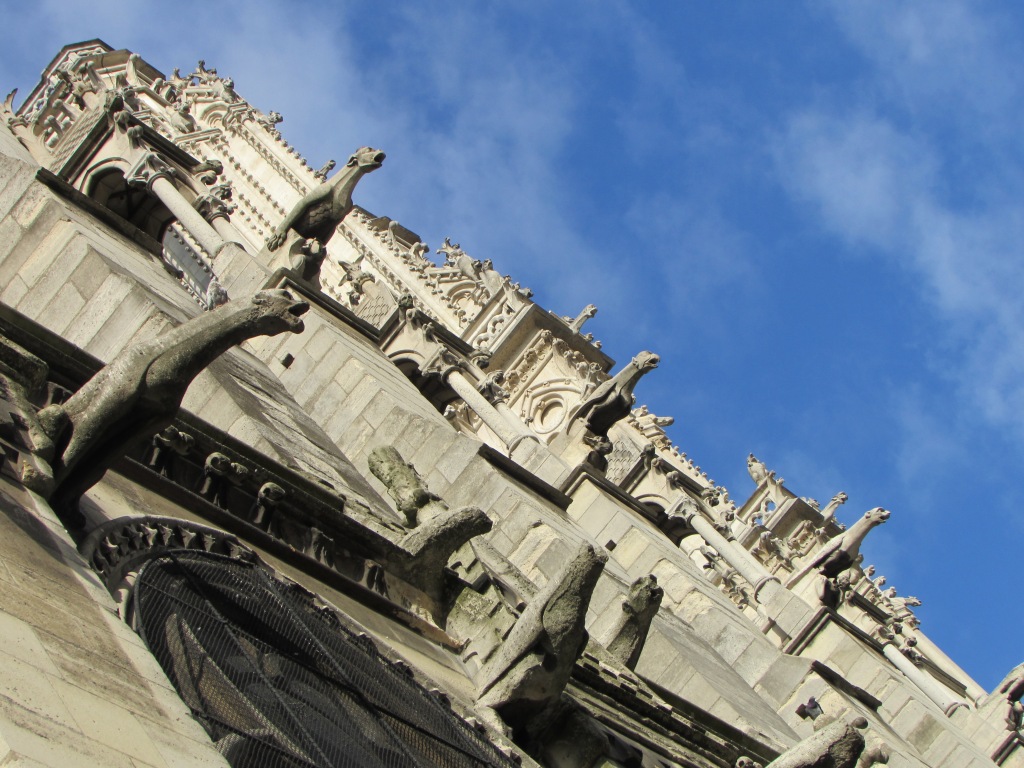 Mural on side of building in Paris, France 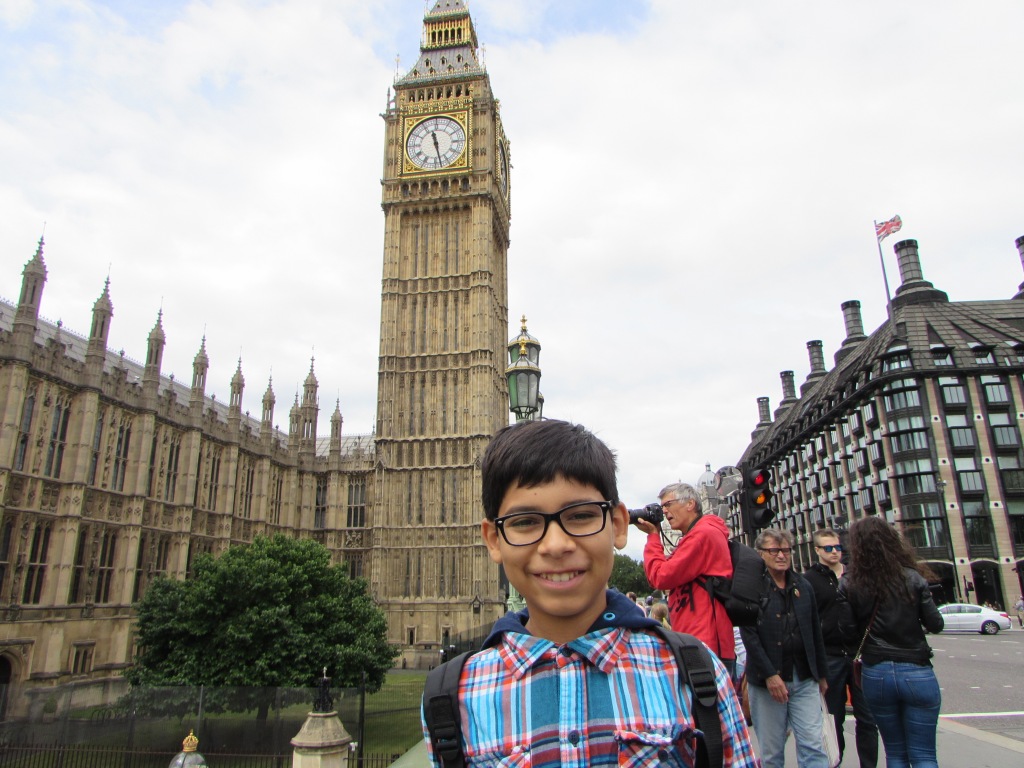 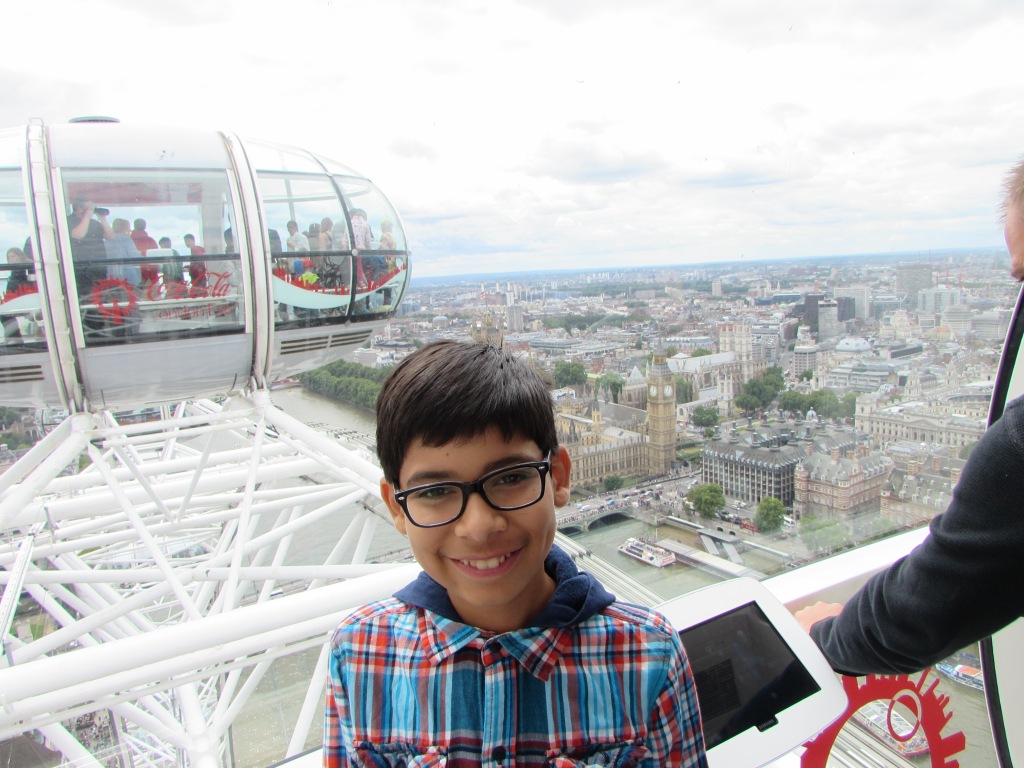